The Ring of Kerry is the famous destination on the south west coast but we feel a tour of the Dingle peninsula is just as good. Not only is it home to hundreds of ancient beehive huts, and being the most westerly point in Europe, there is so much to see and do…..

The Ring of Kerry is the famous destination on the south west coast but we feel a tour of the Dingle peninsula is just as good. Not only is it home to hundreds of ancient beehive huts and the most westerly point in Europe but there is so much to see and do…..

There is so much to see and do around the rugged coastline of Slea Head on the Dingle Peninsula, the most westerly headland in Europe!

You can drive the loop or choose to enjoy a wonderful hike around one of the richest areas of archaeology in this region, with its numerous beehive huts and promontory forts. 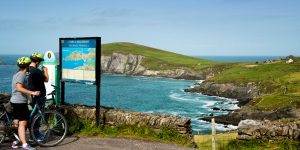 The Gallarus Oratory is located in the heart of the Dingle Peninsula. It is one of Irelands best preserved, most iconic, early Christian churches.

It is over 1000 years old and this inspiring building is constructed entirely from dry stone. Making it the architectural highlight of the Slea head drive. Enjoy breathtaking views of Smerwick Harbour, The three sisters and Mount Brandon.

Steeped in Irish Mythology and Pagan History, the most scenic walking route to the summit of Mount Brandon (952m or 3.123 feet), Irelands 9th highest mountain is the from Faha near Cloghane Village. It is one of the best and fascinating mountain walks along the Wild Atlantic Way. This makes for a strenuous but extremely rewarding 8.5km (4 hour) hike.

There are lots of charming pubs all over the Dingle Peninsula. Visit the previous home of Antartic explorer Tom Crean in .‘The South Pole Inn” Annascaul

Visit West Kerry Brewery & Brick’s Pub (Tig Bhric) – Kerrys only brew pub! Have a pint or bottle of their delicious beer – Our favourite is the Beal Ban!

There are a few truly iconic pubs in Ireland, whose name is known to more or less every person in the land. However, Dick Mack’s is one of those pubs and worth a visit to even just watch a custom leather belt being made in the shop half of the pub!

Nestled under Mount Brandon on the pier at Brandon Village is ‘Murphys Bar‘ – A 5th generation family run pub, grab a Guinness & crab sandwich while keeping an eye out the window for the dolphins who often make an appearance in the bay! The Conor Pass is the highest mountain pass in Ireland, and provides the most dramatic and scenic way of entering or leaving the town of Dingle! This narrow, twisting road runs between the town of Dingle and Kilmore Cross on the north side of the peninsula, where roads fork to Cloghane/Brandon or Castlegregory. Along the route there are 2 amazing viewing points. Both overlook the spectacular glacial valley, one at the highest point on the road and the other is on the north side to see Peddlar’s Lake. If you want to hear and see some of the best traditional Irish musicians in Ireland then look no further than the Dingle Peninsula! In Dingle town alone there is countless pubs with Irish music events every night. From a good old fashioned Trad Session to Set Dancing to Sean Nós singing, you will get a real taste for the traditional music in the Gaeltacht (Irish Language) region.

Try you hand at surfing some of the best waves in Ireland or simply take in the breathtaking views! On either side of the peninsula there is an abundance of choice with Dingle’s Beaches. Inch Beach, Coumeenoole & Ventry would be the highlights on the south side, facing out to Skellig Michael and the Basket Islands. On the north side you have to visit Brandon Bay & Wine Strand!

Take a private tour of the award winning Dingle Distillery where you will see how they craft their Whiskey, Vodka & gin! The distillery was opened in 2012, converting an old sawmill on the edge of Dingle town. They began with brewing Whiskey but quickly added their world famous gin & vodka to their production line.

The best way to see Fungie Irelands if not the worlds most famous dolphin is to take a boat tour and watch him splash about in the sea! Fungie appears so regularly that if he does not you won’t be charged.