On one of our tours you will no doubt hear the beautiful sounds of the Birds of Ireland.

Travelling along the Wild Atlantic Way native birds are ever present and a magical soundscape to your Irish Adventure. Ireland is so lucky to have such an abundance of inland and seabirds which our expert Irish hiking guides will introduce you to if you choose a guided hiking tour in Ireland.

These birds held great prominence in Irish mythology, so we wanted to share some of these tales with you.

The Raven measures as much as three feet from beak to tail. Its long wings enable it to perform extremely agile aerial acrobatics. With glossy black plumage that ornithologists believe is an asset for retaining heat in cold Northern climes. While they gather in social groups when fledglings, by the age of 3, ravens mate in lifelong monogamous and very territorial pairs. They can also mimic the voices of other birds and animals. If held in captivity, these highly intelligent birds can even learn to replicate words spoken by their handlers.

Ravens acted as attendants for the Celtic God of Healing – Lludd. They also used to indicate death, especially when Cuchulainn – the fierce warrior and son of Lugh (God of Light) was finally slain. Furthermore, they were also thought to be messengers from the Other World. Like the wail of a “banshee”, their piercing cry could foretell imminent death for someone. They are called Fiach Dubh in the Irish language meaning the black debt. The Wren is the smallest bird in Ireland and is believed to have occupied a prominent position in druidic pagan religion in Ireland. Tradition tells us that the origins of “Wren Day” in Ireland began in celebration of the winter solstice on Dec 21st to celebrate the Gaelic New Year. The wren is considered the “King of the Birds” and if captured alive would bring in a new & prosperous year. However, the wren is believed to have been the traitor who betrayed St. Stephen to his pursuers, leading to his execution.

Considered to be the first Christian Martyr, the feast of St. Stephen is celebrated on Dec. 26th, which became the day of the wren hunt. “Wren Day” is still celebrated in some parts of rural Ireland each year on Dec. 26th.  Wren feathers are thought to bring great luck – especially for sailors – and with a wren feather in your pocket you are guaranteed a safe journey by sea wherever you go. Their name in the Irish language is Dreolín. The Robin has been with us in Ireland since time began. Irish folklore says that to kill a robin is such bad luck that the offender’s hand would have a permanent tremor afterwards. We also still believe here in Ireland that if one of these lovely little robins strays into our houses it signals the death of someone in the family. The birds were accepted as messengers from those in the spirit world. Known as a Spideog in the Irish language, we have a story in Ireland associated with the robin.

If the soul and symbol of the Old Sun and the Oak King was the Wren, the Robin represented the New Sun. The wren was said to hide in the Ivy, the robin in the Holly. The Pagan Neolithic Festival of the birth of the New Sun, symbolized by the Robin, was at the Winter Solstice (Dec 21st). The Robin (New Sun) killed his father the Wren (Old Sun) and that is how he got his red breast, from the blood of his father.
The Robin is the only bird capable of singing all the notes of the musical scale and they can sing for ½ an hour without repeating the melody – unlike other birds!!! 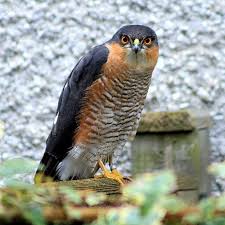 The sparrowhawk or Spioróg in Irish, is an amazing hawk type bird that is classed as “secure” in Ireland. They are vicious hunters, but in fact, not very successful. Chasing 10 birds for every one bird they may catch!!

They are amazingly fast & rely on their agility to create the element of surprise on their prey as they swoop at the last moment. Known to chase prey through branches, ducking & diving with supreme maneuverability, they never “hover” which is an easy way to tell them apart from kestrels.

In the sport of Falconry, brought into Ireland by the Anglo-Normans in the 12th Century. The male sparrowhawk was called the musket and was traditionally kept by monks. At this time the word musket probably meant something that shot through the air at speed, a Sparrowhawk for example. In later years the word musket was used for a crossbow bolt and later still for the new invention of a handgun.

Kestrels were the lowliest falcons – used only by naves or servants. However, they had their use and were traditionally kept near dovecotes to scare sparrowhawks away because they would not bother the doves themselves. It was even said that pigeons would seek out a kestrel to protect them if a sparrowhawk was around. Swan. Probably the most famous of all our mythological stories in Ireland is “The Children of Lír”
This story tells of Lír and his wife Aobh and their four children called Aodh, Fionnghuala, Fiachra and Conn. Lír’s wife died and he married again. His new wife was called Aoife and she became the children’s stepmother. At first she loved them dearly but after a time she grew jealous of their father’s affection for them.

One day she brought them out for a picnic and placed them under a spell. They were turned into four white swans at Lake Derravarragh in County Westmeath. They remained there for four hundred years. Then they flew away and settled on the Sea of Moyle between Ireland and Scotland, where they stayed for three hundred years in cold and misery. From there they spent three years in Erris, County Mayo where they endured even further sorrow.

At the end of that time they returned to their old home at Sídh Fionnachaidh in County Armagh. Their father was long dead and the place was desolate and empty. They flew off again to Erris and there met the Christian Missionary, St. Mochaomhóg who treated them with great kindness.

At last their period of enchantment came to an end and they were turned into three withered old men and an old woman. The saint baptised them and they died peacefully. They were buried together.
Legend goes in Ireland that King Lír decreed before he died that no swan would ever be killed in Ireland.

It is in April that the cuckoo, corncrake and swallow arrive, and it is the custom when one first hears the cuckoo or corncrake, or sees a swallow, to say “May we all be alive and in God’s grace next year. Amen,” or literally “May we all be alive this time again. Amen.”
If one hears the cuckoo from behind, and in the right ear, and also finds some hairs (at the same time) under his right foot, such a one will be lucky for that year. If the cuckoo is first heard in the left ear it is an unlucky sign.

Should the sowing of oats be deferred for any reason until the coming of the cuckoo. The sowing is then known as “cuckoo oats,” and is thus designated to mark the lazyness of that particular farmer.’